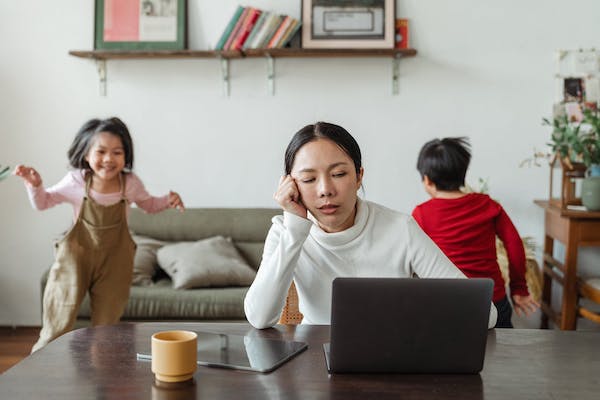 “ReVillaging is a term that the Nestworks team have been using to describe a new, more integrated approach to work/life balance. Our vision is for independently working parents to be able to bring their children to a welcoming space where they are able to attend to their career needs while their kids are safely cared for nearby. We further imagine including elders, and offering after-school amenities.” – Madeleine Shaw, Nestworks Founder

How the Covid-19 pandemic has affected working families—and how a new take on work/life balance might support local families in managing kids and career—was the topic of a recent community conversation. Roughly 70 participants gathered online on February 10 for a lively discussion on the topic of “ReVillaging”. The unique event was conceived and hosted by Nestworks, a Vancouver-based non-profit composed of parent entrepreneurs who have been building the business case for a multigenerational, family-friendly work/play space for the past few years.

Following presentations by Katrina Chen, BC’s Minister of State for Childcare, Toronto-based Globe and Mail columnist Amanda Munday, and local social entrepreneur Madeleine Shaw, attendees broke up into groups to discuss their work/life challenges and how they have been affected—or exacerbated—during the Covid-19 pandemic, and how services like Nestworks could support them.

People were particularly touched by Minister Chen’s account of being raised by her grandmother, aunties, and uncles in Taiwan as an example of what a multi-generational approach to ReVillaging could look like. As a single working parent, she said that she could well appreciate the value of spaces that allowed parents to work, connect with each other, and care for their children.

She also touched on initiatives the BC government is working on, from the $10 a day universal childcare program to exploring how we can more creatively use spaces like school grounds, public places, and employer work sites as solutions to much-needed after school care and/or early learning. She further recognized that 97 percent of early childhood educators (ECEs) are women, many of whom are racialized and/or newcomers to Canada, and that their labour is often undervalued and their voices underrepresented in the childcare discussion. Panelists discussed the various provincial regulations around childcare, which, while inarguably well-intentioned, can limit flexibility for childcare operators.

Herself the Founder of a family-friendly co-working space in Toronto, Munday shared that ReVillaging to her meant an invitation and an opportunity to restructure what work and life look like and to say, “We can do this so much better.” She shared about how she created The Workaround—a 13,000 square foot workspace—in 2018 as a response to the challenge she faced as a then-new parent trying to manage a demanding career in an inflexible technology environment with limited access to childcare.

Munday pointed out that even with a “universal” childcare system, there will still be some families whose needs will not be met. She argued that childcare should be considered as a standard workplace amenity, similar to lunch rooms, scaled according to the size of the business and also suggested that ECEs could also become empowered to start their own businesses, generating sustainable prosperity and independence for themselves.

Shaw explained how the ReVillaging concept was born out of the experience that she and her business partner (Shaw and Suzanne Siemens are co-founders of Aisle—formerly Lunapads—an e-retailer of natural menstrual products) had of bringing their children to work with them in the early 2000s. She shared her feeling that work and family life have only been separate in people’s minds since the advent of the Industrial era and stressed the value of closer community relationships that ReVillaging provides.

Moderator Vanessa Richards pointed out the importance of welcoming everyone and their skills into Revillaged communities, including elders.

Related: How to Teach Children About Diversity, Equity and Inclusion

One major topic was challenges with the current childcare system.

The current childcare system revolving around a 9 to 5 workday was discussed as one that doesn’t work for everyone. Some parents need evening childcare, and others only need care for a few hours a day or for a few days a week (instead of five) and they can’t find help, or they are hustling to pay for more days of childcare per week.

One mother left Vancouver so that she could have support from her parents, who live on Vancouver Island.

Someone said there seemed to be a lack of coordination between city planners, the provincial government, and Vancouver Coastal Health regarding regulations around office space, including newly shared office space.

The second major topic discussed was attendees’ current challenges during the pandemic.

COVID highlighted the fact that all of us, including caregivers, need care and community year-round. Caregivers are used to working with and being around people, and some of them choose to stay home instead of go to work. The providers at Pacific Immigrant Resource Society (PIRS) are challenged both ways: If they work from home, they don’t have privacy. If they go out to work in the community, they fear spreading COVID to their families.

Having children in school for only 2 hours a day doesn’t give parents much flexibility.

Working at home is an emotional load for parents, particularly for mothers. Parents must share workspaces with spouses and/or children, and some don’t even have a home office space.

The loss of a local manufacturer impacted one entrepreneur with a business in the trades industry. Her costs have gone up, her business is hurting, and she heard from female customers that layoffs occurred and shifts were added, making childcare more difficult.

The final topic discussed was solutions to current challenges.

There are many things already working in communities that we could explore more: Cohousing, multigenerational households, and workplace policies.

Childcare facilities benefit an entire community, because it’s not just parents who benefit.

An attendee from Metro Vancouver talked about the affordable housing units they’re building and focusing on developing integrated childcare in the new units. She was intrigued about the idea of adding coworking to innovate, according to what parents might need.

A set of mothers created One Space for All as a solution to their own challenges managing work during maternity leave during COVID. They felt they had no support, so they built a space themselves, with accounting and law help from family members. (Their families also bubbled together during COVID.) Their space offers coworking with flexible, affordable childcare and a massage therapist. They’re also looking to add a counsellor to help members with their mental health.

Being able to have a supportive, family-like community in a workspace is very important. One parent bought property with another family to share land and childcare as a co-working space.

Could we train and hire teenagers for roles in the childcare industry? St. John’s Ambulance offers training to enthusiastic pre-teen and teenage girls AND boys (and the courses are filled to capacity). It’s like a rite of passage for them; perhaps there could be a next-level role for them in the childcare system, or we could pay them to do things like make food, clean up, and play games with children. This would address the loneliness/isolation they may be feeling, and teach them to lead and be responsible with love (screen-free!).

In the same way coworking with other adults leads to osmosis and inspiration, we could look at working with our teenage children at home as a way for them to learn from us, even if they’re on their devices.

A volunteer with Girl Guides of Canada said that two-hour online meetings for girls has helped parents manage their time.

People envision Nestworks as a place where parents could get help, both practically and emotionally. Perhaps larger spaces like WeWork or Regus could partner with Nestworks. A bus that could pick up kids and bring them to a coworking space (like what Nestworks is proposing) would be ideal.

If Vancouver isn’t where the greatest need is, perhaps Nestworks could start in other geographies, like Victoria.

There was a comment about needing more female developers.

Instead of building large offices, this is an opportunity for big corporations to provide these important options for their employees in smaller, satellite offices.

It was suggested that Nestworks look into the City of Vancouver’s Joint Care Council that is collaborating on regulatory issues in BC (developers should be a part of this conversation too). They’ve thought through many of these issues over the years and have seen the negative outcomes when regulatory corners have been cut.

The event was an example of everyone’s contributions to new visions for ReVillaging.

The next event will take place on Wednesday, April 7 at 5pm PT so stay tuned on social media and in our newsletter for the details. http://nestworks.space.

Getting Ready for Baby

Shifting a Passion for Wine into a Career